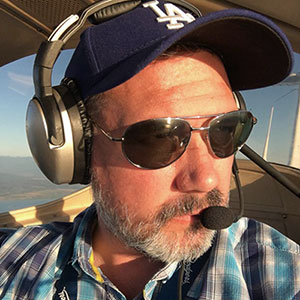 Jeffrey Lustick founded Tomahawk Aero Services LLC in November of 2016 to fill a gap he found in the General Aviation industry.  His goal was to make the ownership of ordinary aircraft easily attainable for first time buyers and low time pilots. From the company’s headquarters in Bellingham, Washington, he and his staff work hard to find the right plane for you and get you all of of the correct information needed to make a good buying decision.  He has also helped aircraft owners painlessly sell their aircraft.

Jeffrey is a pilot, photographer, airplane owner, and an accomplished law school graduate. He began his legal career in 1997 as a JAG officer in the U.S. Air Force, and has owned a law firm in Bellingham, WA. After leaving active military service in 2001, he worked as a municipal prosecutor in Bellingham, WA, and then entered private practice. He regularly files Cessna and Piper aircraft.

Jeffrey served as a legal news consultant, on-air contributor, and was a frequent fill-in talk show host for KGMI Radio AM-790 in Bellingham. He also frequently provided legal and aviation commentary for news stories on television stations KIRO-7, KING-5 and KOMO-4 in Seattle and has done so nationally for ESPN-Radio. He also appeared several times as a legal consultant and on-air guest for TruTV (formerly Court TV) in Manhattan, N.Y.

He is has been a member of the Aircraft Owners and Pilots Association (AOPA) Legal Plan Attorney’s Panel, the Washington Pilot’s Association, the Experimental Aircraft Association, the U.S. Air Force Auxiliary-Civil Air Patrol, the American Legion, the Sons of the American Legion. He is a former member of the Washington Air National Guard. A pilot since the age of 17, Jeffery has more than 3,000 hours of flight experience in Cessna, Diamond, and Piper aircraft.